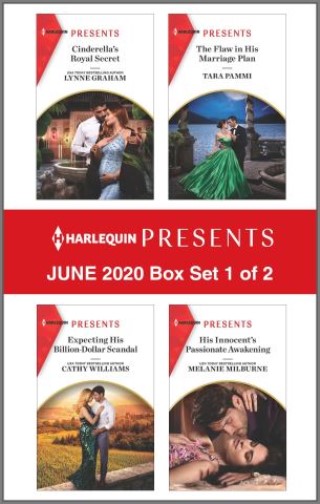 CINDERELLA’S ROYAL SECRET
By Lynne Graham
For innocent cleaner Izzy, accidentally interrupting her most exclusive client, sheikh Rafiq, coming out of the shower is mortifying…yet their instantaneous attraction leads to the most amazing night of her life! But then she does a pregnancy test…

EXPECTING HIS BILLION-DOLLAR SCANDAL
By Cathy Williams
Luca relished the fact his fling with Cordelia was driven by desire, not his wealth. Now, their baby compels him to bring her into his sumptuous world. But to give Cordelia his heart? It’s a price he can’t pay…

THE FLAW IN HIS MARRIAGE PLAN
By Tara Pammi
Family is everything to tycoon Vincenzo. The man who ruined his mother’s life will pay. Vincenzo will wed his enemy’s adopted daughter: Alessandra. The flaw in his plan? Their fiery attraction… and his need to protect her.

HIS INNOCENT’S PASSIONATE AWAKENING
By Melanie Milburne
If there’s a chance that marrying Artie will give his grandfather the will to live, Luca must do it. But he’s determined to resist temptation. Until their scorching wedding kiss stirs the beauty to sensual new life!

Lynne Graham: Lynne Graham lives in Northern Ireland and has been a keen romance reader since her teens. Happily married, Lynne has five children. Her eldest is her only natural child. Her other children, who are every bit as dear to her heart, are adopted. The family has a variety of pets, and Lynne loves gardening, cooking, collecting allsorts and is crazy about every aspect of Christmas.Cathy Williams is a great believer in the power of perseverance as she had never written anything before her writing career, and from the starting point of zero has now fulfilled her ambition to pursue this most enjoyable of careers. She would encourage any would-be writer to have faith and go for it! She derives inspiration from the tropical island of Trinidad and from the peaceful countryside of middle England. Cathy lives in Warwickshire her family.Tara Pammi can't remember a moment when she wasn't lost in a book, especially a romance which, as a teenager, was much more exciting than mathematics textbook. Years later Tara’s wild imagination and love for the written word revealed what she really wanted to do: write! She lives in Colorado with the most co-operative man on the planet and two daughters. Tara loves to hear from readers and can be reached at tara.pammi@gmail.com or her website www.tarapammi.com.Melanie Milburne read her first Harlequin at age seventeen in between studying for her final exams. After completing a Masters Degree in Education she decided to write a novel and thus her career as a romance author was born. Melanie is an ambassador for the Australian Childhood Foundation and is a keen dog lover and trainer and enjoys long walks in the Tasmanian bush. In 2015 Melanie won the  HOLT Medallion, a prestigous award honouring outstanding literary talent.