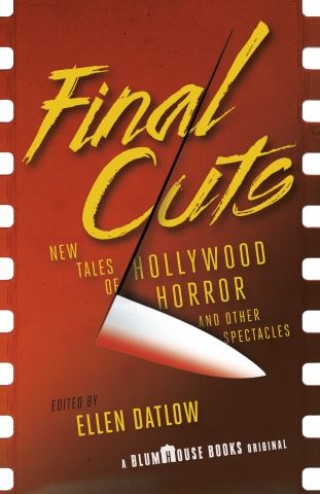 New Tales of Hollywood Horror and Other Spectacles

From the secret reels of a notoriously cursed cinematic masterpiece to the debauched livestreams of modern movie junkies who will do anything for clicks, Final Cuts brings together new and terrifying stories inspired by the many screens we can't peel our eyes away from. Inspired by the rich golden age of the film and television industries as well as the new media present, this new anthology reveals what evils hide behind the scenes and between the frames of our favorite medium. With original stories from a diverse list of some of the best-known names in horror, Final Cuts will haunt you long after the credits roll.

Ellen Datlow: ELLEN DATLOW has been editing science fiction, fantasy, and horror short fiction for over thirty-five years. She currently acquires short fiction for Tor.com. In addition, she has edited more than fifty anthologies, including The Best Horror of the Year series, Fearful Symmetries, The Doll Collection, The Monstrous, and Black Feathers. Along with author Lisa Morton, she edited the Blumhouse Books Original Haunted Nights. A multiple award winner for her work, Datlow is a recipient of the Karl Edward Wagner Award, given at the British Fantasy Convention for "outstanding contribution to the genre," and has been honored with Life Achievement Awards by both the Horror Writers Association and the World Fantasy Convention. She lives in New York and cohosts the monthly Fantastic Fiction Reading Series at KGB Bar. More information can be found at www.datlow.com, on Facebook, and on Twitter as @EllenDatlow.