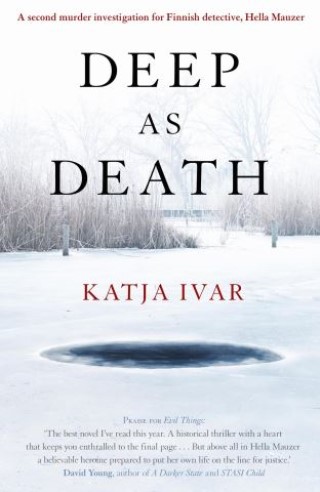 •The second in a three-book series.

•A Nordic Noir of the first-order set in Helsinki in 1953. A dark a psychological thriller about ruthless ambition, unrequited love and the lies we tell others and ourselves to avoid facing what has become of our lives.

•A woman author and a female heroine. Deep as Death is the second novel in the Hella Mauzer murder series. A misunderstood, flawed, whip-smart detective, now a P.I, fighting against both prejudice and crime. Escaping the mind-numbing routine of collecting evidence about unfaithful spouses, Hella suddenly finds herself at the centre of an investigation of multiple murders that threaten to destroy the reputations of the rich and powerful. Ivar has again succeeded in telling an incredibly gripping story with some of the cast of characters that we fell in love with in Evil Things.

• What begins as a taut whodunit turns into something more tantalizing and psychological as Hella investigates different suspects, including Steve, the US DJ and love her life, reluctant to leave his wife for Hella, and the fascinating Inspector Mustonen, charismatic, ambitious and trying desperately to live up the standards of his high maintenance wife. There are dark powers at play, including Finnish obsessions with the social and religious cleansing powers of death by drowning in icy waters, as well as lighter passages, particularly those involving Anita, voluptuous but savvy, freshly arrived from Lapland to join the Helsinki police force, a most unwanted roommate for Hella. Sadly she too ends up in deep trouble, in a satisfying denouement of twists and turns.

• Sense of place and time: Finland survived the turmoil of three wars between 1939 and 1945. In the 1950s independent but neutral Finland is keeping its moves quiet and predictable so as not to surprise the Soviet Bear into violent or coercive action. Not a vassal state of the Soviet Union like the Baltic States to its South, but living by her own form of neutrality perched between two superpowers. Not able to accept Marshall Plan Aid, in fact, forced to pay war reparations to the USSR, and never (to this day) to be a member of NATO. But Helsinki hosted the 1950 Olympics, an occasion to show the world Finnish architectural and design prowess and its cult of athletics. These events provide a fascinating context to the story, briefly but importantly interrupted by the news of Stalin’s death.